Solar Energy Scotland said if it reaches its target by the end of the decade, job growth could follow.

Solar power could create more than 8500 new jobs in Scotland by the end of this decade, if Scottish ministers can match the “ambition” of the sector.

Industry body Solar Energy Scotland released new figures showing that if its target of six gigawatts capacity of new solar power can be achieved by 2030, that is the number of jobs that could be created.

And such a move would see the sector employ five times as many people as worked in Scotland’s aquaculture industry in 2020.

Solar Energy Scotland has already said it is “entirely possible” that the sector’s capacity could increase by between four and six gigawatts by the end of this decade.

Even growing the electricity generated from the sun by four gigawatts could see more than 5500 new jobs created, it said.

The figures were revealed in new research from Solar Energy Scotland, which was published at the same time as the organisation called for the Scottish Government to include targets for solar power generation in its forthcoming energy strategy, in the same way that has been done for other parts of the renewables sector.

Thomas McMillan, the chairman of Solar Energy Scotland, said: “We now have, for the first time, a real sense of how many high-quality jobs the solar sector stands poised to bring to Scotland by the end of the decade.

“We can expect thousands of new jobs to be created, from the most rural parts of the country to our urban centres, and it’s not just installation and maintenance: our members will also be hiring energy advisers, environmental planners, data analysts, and many, many other roles.”

He continued: “The sector requires no subsidy to make this happen, but we do need ministers to support our ambition for four to six gigawatts of new solar power across Scotland by 2030.

“And there are a series of legacy planning and connectivity obstacles which will need to be swept away if Scotland is to see these benefits.”

Solare Energy Scotland has already had what is described as a “very positive” meeting with Energy and Net Zero Secretary Michael Matheson.

And Mr McMillan said: “We are confident that the Scottish Government understands the urgency of the situation and sees the benefits the industry is poised to help deliver.”

Josh King, vice-chair of Solar Energy Scotland and director of Moray-based manufacturer and installer AES Solar, who co-authored the report, said that the sector was “essential if Scotland is to meet its decarbonisation targets”.

“No form of power is getting cheaper more quickly, and solar now costs less per megawatt hour than any fossil plant.

“The opportunities are enormous, including more than 8,500 new jobs, and Scotland cannot afford to be left behind.”

A Scottish Government spokesperson said: “We are fully committed to reaching net-zero emissions by 2045 and transforming Scotland in to a fairer, greener and more prosperous country, that is why we have committed £2bn in low carbon funding to invest in new measures to end Scotland’s contribution to climate change and create green jobs.

“We recognise that planning will play a crucial role in supporting the delivery of a net zero, sustainable Scotland by 2045. Following detailed scrutiny by the Scottish Parliament and public consultation, we are currently considering views on the draft National Planning Framework 4. We will publish and lay in the Parliament a revised NPF4 in due course.” 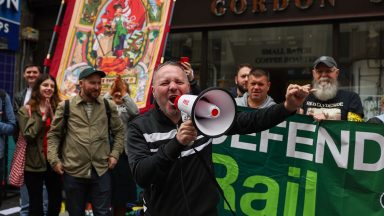