The 48-year-old male motorcyclist was pronounced dead at the scene on the A815.

A motorcyclist has been killed after a crash with a lorry on the A815 near its junction with the A83 in Argyll and Bute.

Emergency services were called to the scene south of Cairndow at around 2pm on Monday after a black Yamaha FZS1000 motorbike and a blue Volvo FH540 lorry collided.

The 48-year-old male motorcyclist was pronounced dead at the scene. No-one else was injured.

The road was closed for around four hours for a full collision investigation to take place and was re-opened at around 6pm.

Police Scotland has appealed for witnesses, including a group of motorcyclists travelling north on the A815 prior to the crash, to get in touch.

Sergeant Douglas Scott, of Glasgow Road Policing Unit, said: “Our thoughts are with the family and friends of the man who has died in this crash and our enquiries are ongoing to establish the full circumstances.

“I am asking anyone who may have been in the area at the time and saw what happened or a group of motorcyclists travelling north on the A815 prior to the crash to get in touch.

“I would urge anyone who has dash-cam footage that could assist with our investigation to contact officers.”

Anyone with information can call Police Scotland on 101, quoting incident number 1853 of June 20.

Probe launched into death of Chinese grandfather at detention centre

Man dies after getting into difficulty at canal in Glasgow 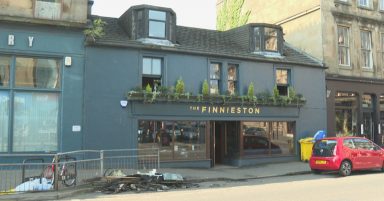