One anxious mum is waiting for passports for her two little boys ahead of their first trip abroad with family. 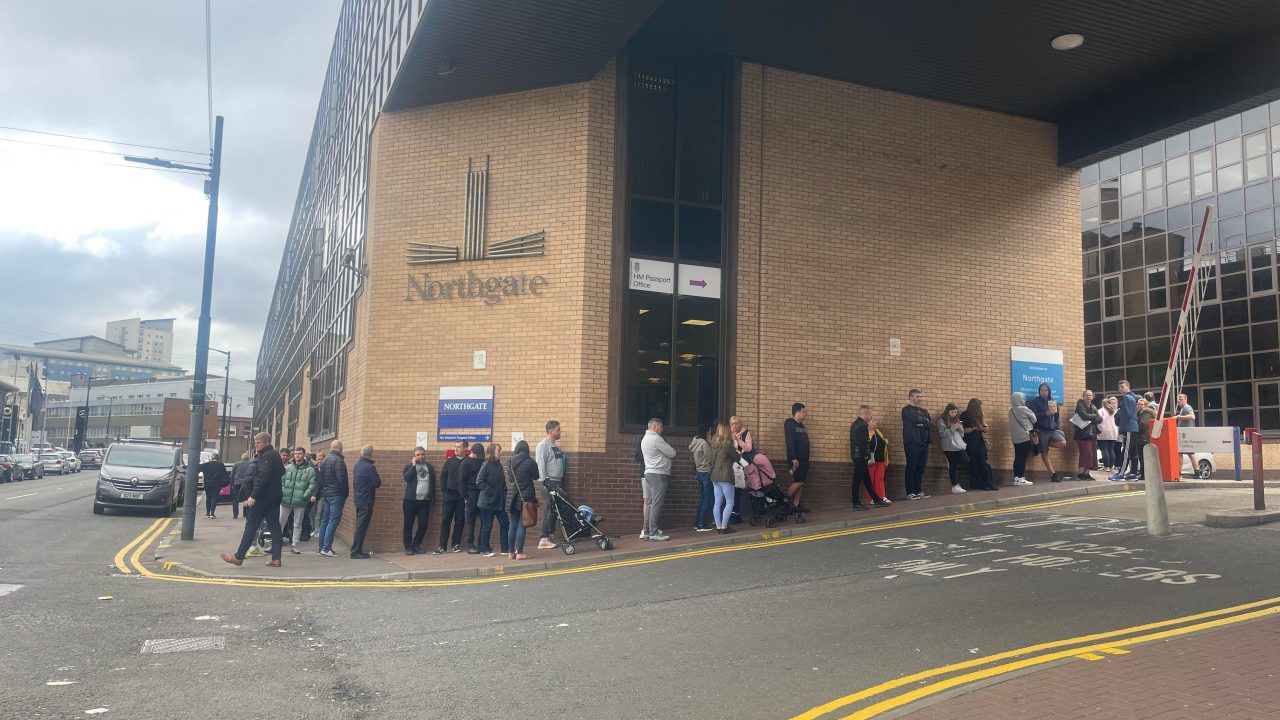 A family fear losing out on their £17,000 holiday as they wait for a passport for their little girl.

Laura Douglas applied for a passport on April 12 for her four-year-old daughter Ava which has not arrived. The family plan to travel to Mexico to celebrate her husband’s 40th birthday, where they will be joined by other relatives.

The mum-of-six has made several calls to the office. She has been told three times by helpline staff that she will receive a call back in 72 hours with no response.

She was among dozens of people STV News witnessed queuing outside the Glasgow Passport Office on Wednesday, fearing they wouldn’t get their crucial travel documents in time for summer breaks.

“In the online tracking system, it looks like it’s going backwards rather than progressing forward,” Laura said.

“We splashed out on this because we missed holidays during lockdown. If Ava doesn’t get it, I can’t go without her. We wouldn’t be able to refund the holiday either.

“We’ve been so stressed. My husband and I discuss it away from the children but we are really panicking.”

Would-be travellers across the UK are facing long delays to secure new passports amid a surge of applications as restrictions are lifted and post-Brexit rules come into force.

Passports must be valid for three months after the traveller plans to leave their EU destination. It must also have been issued less than ten years before the date they enter the country.

That means more people are applying for a new passport earlier than they would have if the UK was still in the EU.

Hours waiting on helplines, queues outside passport offices and missed trips have been widely reported over the last few months as officials grapple with the backlog following Covid travel restrictions being lifted.

The UK Government said last month it expects 9.5 million British passport applications to be dealt with in 2022 – 2.5 million more passports than usual. Covid restrictions on travel resulted in just four million applications in 2020 and five million in 2021.

Passports must be valid for three months after the traveller plans to leave their EU destination. It must also have been issued less than ten years before the date they enter the country.

Sara Hamilton has waited ten weeks for passports to arrive for her two sons aged three and four. They are booked to go to Alcúdia in Spain with their wider family in a fortnight.

The beauty therapist described her experience as “horrendous” and explained that the tracking systems for both applications haven’t progressed since May.

With 13 days until her departure date, Sara said they qualify for a fast-track appointment, but she hasn’t received a call back.

“It’s a massive family holiday with 18 of us going, which we planned during lockdown,” she said. “It’s the boys’ first time being away with cousins. They might miss out because of the Passport Office’s failings and it’s shambolic.

“It’s been awful. I’m anxious and I cried in work yesterday. It’s not the money, it’s the thought of the kids missing out.”

Lauren Kelso is due to go on her first holiday abroad in 17 years in three days, but her passport has not yet arrived. She applied on April 29.

The teaching assistant, from Alloa, took annual leave to travel to the passport office in the early hours of Wednesday.

She and her partner are spending a week in the island of Ischia, Italy, in their first trip together while her children holiday with their dad.

“Having the money to be able to go away and do something for myself is so important to me and now I don’t have my passport,” she said.

“I’ve emailed the office every two days and I never get a call back in 48 hours. I’m hoping someone can help me.

“It seems Boris Johnson and his government are in denial over people waiting so long. Recent applications are being processed really quickly.

“We [those who applied earlier] are already a statistic so they don’t care as much, they only care about what the figures look like.”

A Passport Office spokesperson said: “Staff are processing approximately 250,000 passport applications each week and the latest figures show that 98.5% of applications have been completed within ten weeks.

“But we cannot compromise security checks and people should apply with plenty of time prior to travelling.

“Since April 2021, we’ve clearly stated that people should allow up to ten weeks when applying for their passport to factor in the increased demand, which has seen five million people delay their passport application due to the pandemic.

“An expedited service is available to help the small percentage of people whose applications take longer than ten weeks to receive their passports before they travel.”

Probe launched into death of Chinese grandfather at detention centre

Man dies after getting into difficulty at canal in Glasgow